Exhibit at Augustiana in The Red Mansion and surroundings

Welcome to Embryo Core: Excavating a Coded Future. The project takes place in the Red Mansion of Augustiana Art Gallery and the surroundings. Scroll down to see the map of the area. It is recommended to start at the Red Mansion and then go on to explore the outdoor installations. Look for signs placed near each location. Please take care and don’t disturb the installations. 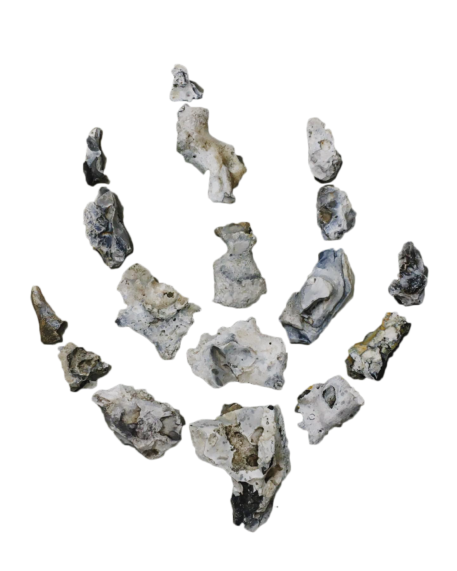 Looking at the map of Als you will see that the island vaguely resembles the shape of an embryo, with Augustenborg fjord being a navel-cord. A new scientific theory connects it to an exceptional phenomena that has been recently discovered near the coast of Augustenborg fjord.

The Embryo Core network is made visible through geological, biological, archaeological and mythological studies of the area. It can be described as an ancient interspecific network of consciousness. The exact formation of the network is not fully known. The 80 million year old flint structures create an elaborate underground pattern that stretches for several kilometers along the shore. The structure seems to move and change, but due to lack of scientific data it is hard to understand how. It is noticed that external activities, such as thunderstorms have an enhancing effect on the network. The roots of the trees, fungi mycelium and moss colonies seem to follow the shape of the network and gain nourishment from it.

The prehistoric and more recent settlers of Als have interacted with Embryo Core. A number of local myths and legends seem to refer to the phenomena. While visually resembling embryo-like shapes, it is suggested that it is our mind, not able to comprehend with what it seems, that substitutes the true appearance of Embryo Core with something it can relate to. A shape that suggests potential life, fragility and evolution. 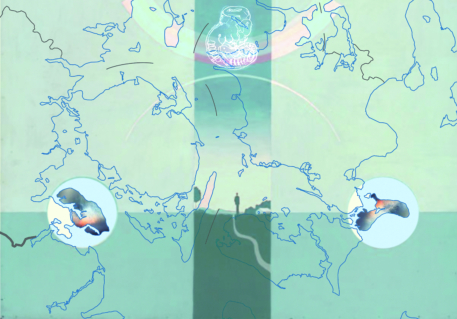 Walk out of the Red Mansion into the park passing the large art installation. Shortly you will reach the first location: three trees that grow together and form a portal.

The location is marked by three calcious extrusion inlaid with patinated flint. They mark an ancient gateway, where the blue fire once burned. It is said that if you fall asleep in the middle of the Gateway, the fairy dream will take you on a majestic (and sometimes dangerous) journey into a distant time and place. The exit gate lies near Lisleund garden on the island of Møn, so this is where you will wake up. There is a secret, yet intimate connection between the two islands. Many rites and mysteries unite them. Like the fruiting body of a mushroom, only a small part of the Gateway comes out above the ground. The rest spreads out like a mycelium network and continues west for about one kilometer. The complex underground structure interweaves flint formations, tree roots and subterranean water streams. It is in this underground structure that Embryo-cores are being formed. 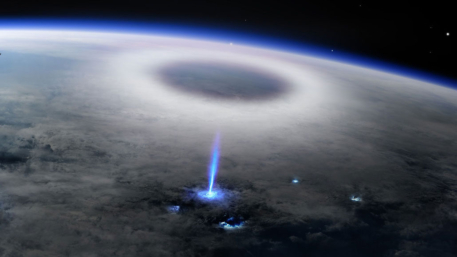 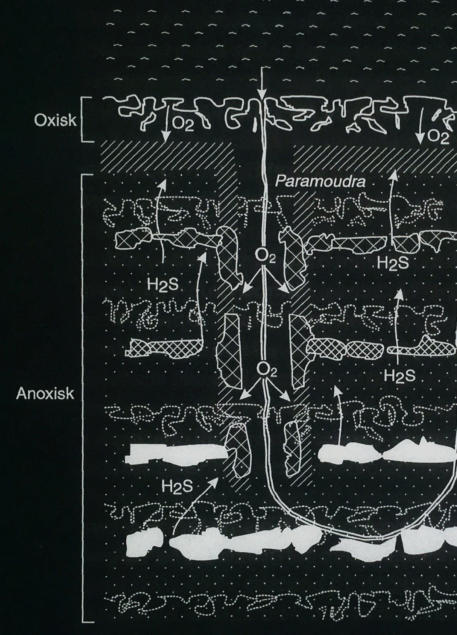 The diagram of flint formation from Flintstudies – a handbook for systematic analysis of flint inventories.

Go back to the Red Mansion and walk over to the large oak tree. Near the oak there is an old tree stump. Come closer and look into the stump

Local legends from Augustenborg area would often mention Bound Fire phenomena – a magic spell would be put in a tree, a large stone or another prominent object in the landscape. This object will attract lightning strikes and thereby protect the nearby houses. The energy from the lightning strikes goes into the ground and spreads into the underground network of Embryo-core, thereby nuturing it.

The above-mentioned tree stump had a Bound fire in its roots for several hundred years. But in 2019 a big thunderstorm has broken out above Als. It resulted in an enormously powerful lightning discharge, called blue jet, being channeled into the Embryo-core network. In the process the tree had collapsed and fragments of the network became exposed. A fragment of an actual Embryo-core formation can be seen in the stump. 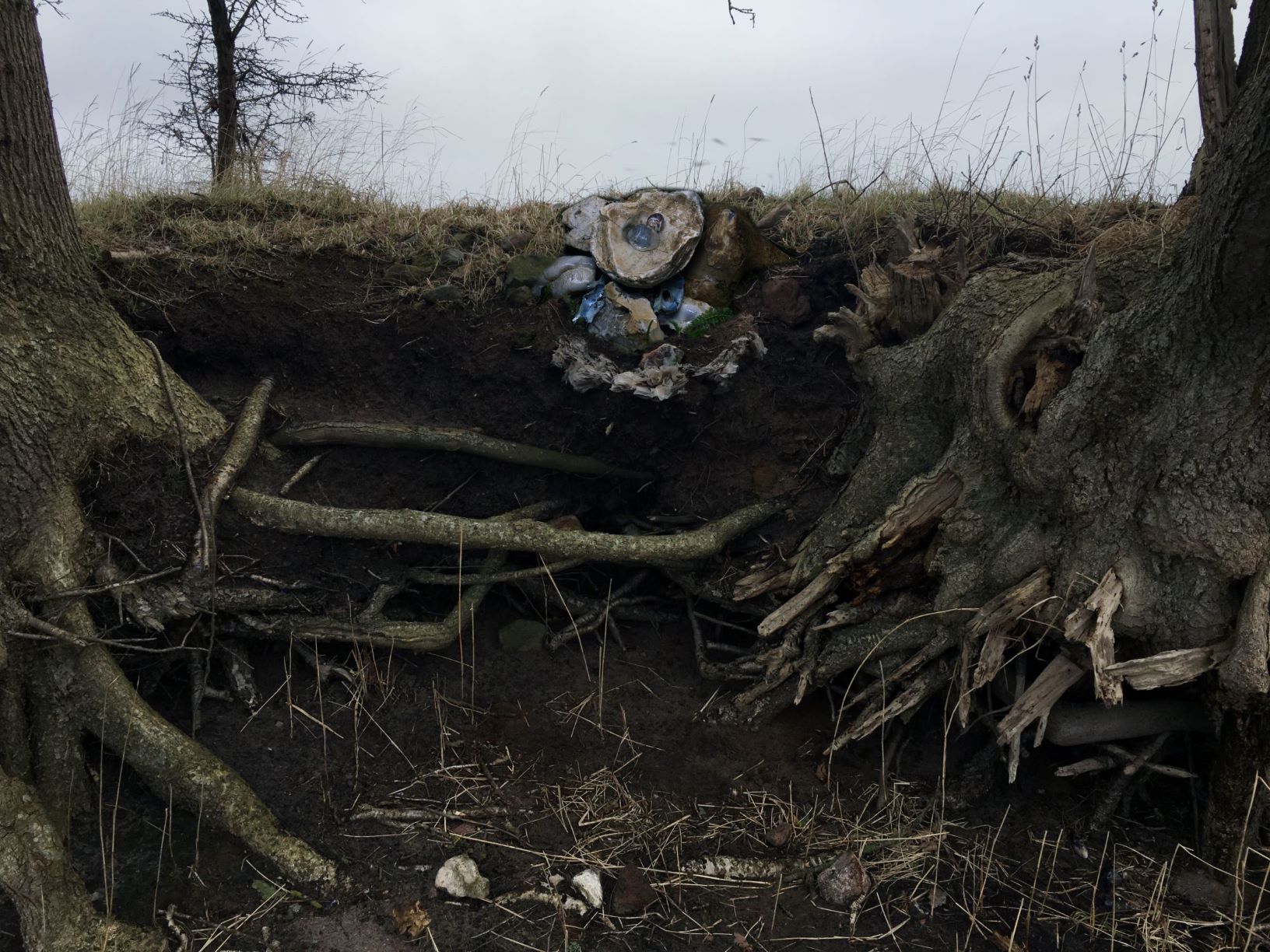 Walk towards the forest and follow the path to the fjord. When you reach the coast turn right and walk on for about a kilometer. After you pass a camping shelter the landscape will open up. As you’ll walk along the water, you’ll see a sign and reach the final destination of the route.

Inside a cradle the child sleeps. His dreams are shaping the flow of time. In the dream the time moves differently: it is a constant deja vu of recognizing the present moment as you move into the future. The landscape changes and millenia pass. The water rises and withdraws, the glaciers pass and forests grow. The child calmly sleeps in the pulsating waves of time. You are standing in the place of an ancient burial mound. Made around 6000 years ago during the time of Neolith it has been slowly eroded by time, human activities and water. A perfectly shaped Embryo-core formation has recently surfaced from the mound. The structure and color of each circular formation around the child was shaped during the period of one or several million years. If you have taken a blue-white stone from the Red Palace, please place it around the cradle. Alternatively, find another small stone on the shore and leave it near the cradle. Look around you. Think of the forest, the coast and the flint. Feel the enormous spans of time passing through this landscape. We are short-term guests on this planet.

Marena is named after an ancient slavic goddess associated with death, rebirth and dreams. In Slavic dialects the word ‘mara’ means dream, but also ‘phantom’, ‘vision’, ‘hallucination’. Marena is a vessel for a child that is yet to be born. It is a shell for a human consciousness and a shield for surviving extreme conditions in a new environment.

In places where there is no need or possibility for horizontal movement, a rooted – plant like body is prefered. Firmly attached to the ground, Marena gets the energy from Embryo Core network, while the shielded mind inside it hibernates, unfolds and travels to other dimensions by the means of planetary network. 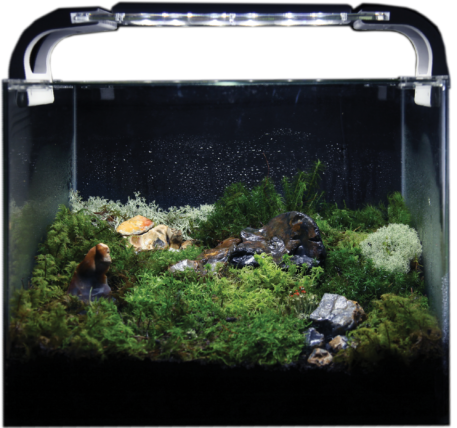 This autonomous system was created to host a section of the Embryo Core network. Extracted from Augustenborg forest, the network requires a custom lighting and watering system to exist indoors. A Biosanctuary system was applied to create necessary conditions by maintaining moisture, light and geochemical balance.

Viewing a Biosanctuary is a contemplative practice. It helps to reconsider our inner ecology and reconnect with geological and biological domains that have been around for many millions of years. It is a way to travel in time within a living and ever-changing micro-landscape.

Recently excavated in the Augustenborg area, this chrysalis is undergoing fast development. The being reacts to human presence and remains synched with the Embryo Core network.

A LANDSCAPE OF FLINT & MOSS

Georg Jagunov wanders through the landscape with an awakened presence that is both experiencing and creating at the same time. He rediscovers and gives new names to the objects and phenomena. During his speculative wanderings there are many parameters at play. Landscape- shaped by geological time, – formed by human spirit, – enhanced by inherited mythological narratives and hidden or forgotten artifacts. Jagunovs works with what you can call artistic geology, mythology and archeology. He doesn’t speculate over the present or the past, but rather gazes into it and lets his imagination run free, constantly In a process of becoming, and in dialog with the landscape.

Jagunovs artistic practice is a meditative attentiveness to the materiality of the landscape. He works with haptic textures of soil, flint and mosses and highlights their inherent narratives and material compositions. Georg lets the images appear directly from the material. He is aware of the formal qualities of both nature and his installations, but it is the journey into the texture of the materials that guides him. He moves effortlessly from a cosmological scale into the microcrystalline structure of flint. The surface of the stone becomes a screen or a portal into the mythological narratives ransformative forces that have shaped the landscape long before humans appeared on the planet.

He calls his installations and sculptures geofact formations. In archeology a geofact (a portmanteau of “geology” and “artifact”) is a natural stone that is difficult to distinguish from a man-made object, especially when compared to Stone Age artifacts. Georg “reads” every stone that he finds and imagines its past- by interpreting the color, the surface and the fractures that shaped the stone during the last 10.000 years. Or was it the last 80 million years? He places the stones in geofact formations to create new narratives, and adds synthetic materials to achieve a contemporary expression. 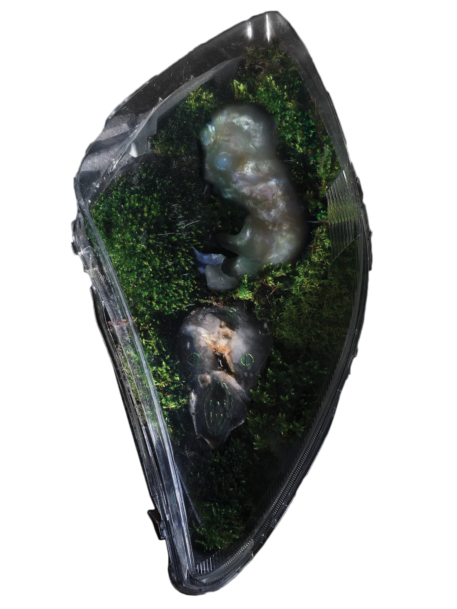 Georgs installations of flint and moss require water and light. They absorb water, become saturated and thereby get a new inner life. The play of the light on the stones moist surface creates elusive polymorphous and polychronic movement. The water droplets create a play of light in the small glass-clear cells of the moss, which act as light scattering lenses. Jagunov arranges the objects in certain patterns and by using artificial or natural lighting illuminates their surfaces so that, despite the immediate opacity, they seem to be filled with light. The engravings on the stones are traced with fluorescent and metallic colors, while the small poetic texts, like messages from another world, are written on a luminescent fabric. Jagunov’s geofact formations radiate with light. It is the aesthetics of light that adds to the objects and makes them alive. The light in Jagunovs sculptures and installations creates the openings – a transcendence – that goes beyond the material and invites to travel together with stones and mosses into spiritual dimensions and other times.