Augustiana is situated in the beautiful mansions of Augustenborg Palace. The history and function of the mansions are inextricably linked to that of the Palace.

Augustiana forms part of the original Augustenborg Palace in the port and duchy of Augustenborg, northeast of Sønderborg. Augustenborg emerged in the 18th century concurrently with the expansion of the Duke’s palace. Augustenborg Palace was constructed in 1770-76 in Late Baroque style and named after Duchess Augusta. The palace in turn lent its name to the ducal family who owned the area for several hundred years. Duke Christian August II of Schleswig-Holstein-Sønderborg-Augustenborg was the last member of the ducal family to reside in the Palace. He played an active role on the side of Schleswig-Holstein against Denmark in the Three Years’ War, during which the Danish army seized the Palace. After 1864, the Palace was governed by the state of Prussia and used as a women’s seminary.

After reunification, Denmark bought back the Palace with its buildings and park. From 1932 and right up until 2015, Augustenborg Castle served as a state psychiatric hospital. During this period there was a chief physician’s and a gardener’s dwelling in the mansions, while in the 1990s the White Mansion served as a holiday home for the psychiatric patients.

Today, Augustenborg Palace houses the Danish Agricultural Agency. In the process of relocating state jobs, 300 employees moved to Augustenborg. Although there is no public access to the Palace, the Palace’s chapel, which serves as the parish church for Augustenborg, is open to everyone. The same goes for the Palace park and courtyard. A small museum in the breeding wing on the left-hand side features an exhibition about the Palace and its history.

Since 2008, when the municipality took out a lease on them, the mansions and park have been run by Augustiana Art Centre and Sculpture Park – in the start-up phase by Galleri M and later Galleri Nørballe. In 2018, the two mansions, the barns and the sculpture park were taken over by the municipality of Sønderborg. In the coming years they will further develop the venue as a centre for art under the name of Augustiana Art Gallery and Art Park. 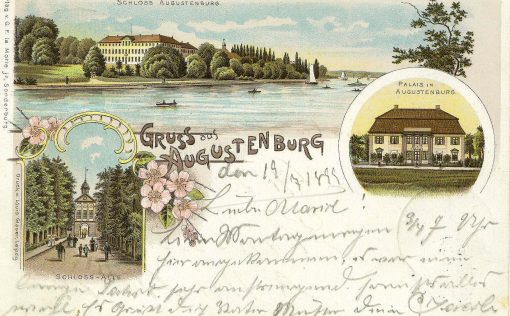 The White Mansion is an imposing building with no over-the-top frills and furbelows. It was built in 1786-88 by Frederik Christian I, Duke of Augustenborg, as a residence for his frail daughter, Princess Louise. In 1815 it was taken over by the Dowager Duchess, Princess Louise Augusta, the love child of the physician-in-ordinary Johann Struensee and Queen Caroline Mathilde.

It is said that Louise Augusta was a flamboyant, artistic woman and, up until her death, the Mansion was a colourful hub for parties, culture, life and romance. Since then, the house has been inhabited sporadically, serving for example as the chief physician’s residence and a holiday home for psychiatric patients.

The Red Mansion is also known as ‘Prince Emil’s Mansion’ and ‘The Prince’s House’. It was built around 1764 by Prince Emil August (brother of Duke Frederik Christian I) as a home for his retirement. The unmarried, retired general lived here until his death in 1786. Subsequently, this small, harmonious mansion and its adjacent side buildings have served a number of different purposes. The term ‘The Prince’s House’ comes from a regulation issued by the Duke in 1775 for the distribution of seats in the then, recently-completed Palace chapel.

The Prince’s House is a well-proportioned building and, due to its depth, is also quite spacious. There is no doubt that the house was more than satisfactory for the unmarried, retired general who lived here with his small staff of servants until his death in 1786. The Prince’s will determined that in the future his property should be part of the Augustenborgian entailed estate, but that his niece, Princess Louise should have usufruct of the house with all its contents, “furniture, utensils and linen” for the rest of her life.