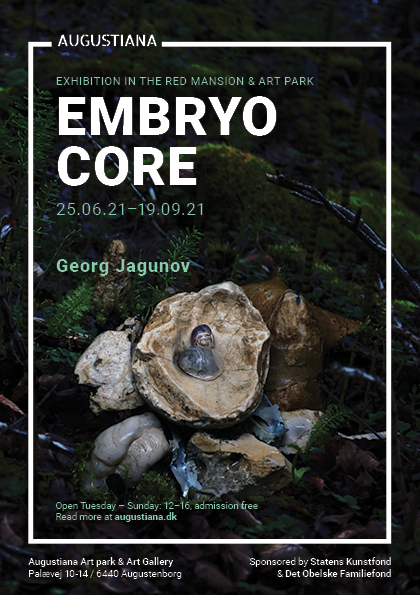 Read the booklet in English
Til oversigt

In a number of site-specific installations, Georg Jagunov investigates landscape, geology, ancient monuments and legends in and around Augustiana.

On one hand, the project features an exhibition of sculptures and digital projections; on the other, it includes an ‘art route’ through Augustiana Art Park and Augustenborg Forest. In the latter case, several works distributed over a large area will form a systematic route, along which visitors can stroll. Visitors thereby play an active role in the artistic experience, which is not just related to the works in themselves, but equally to their interaction with nature and the sensation they get of moving along the route and following a map.

The entire project features a cohesive narrative, comprising numerous topics and references. A key theme is the reinterpretation of the distant past and the notion of a possible future. Unknown, subterranean life and supernatural phenomena encounter the latest biotechnology, time travel and multidimensionality. Georg Jagunov is working on a similar project in Liselund Castle Park on the Danish island of Møn. The two projects are two chapters in a cohesive narrative, which the artist calls Hierarchy of Concealment II. 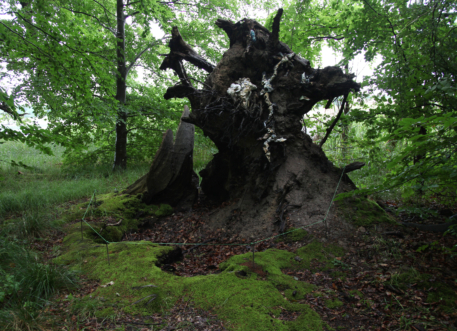 Georg Jagunov comes from Belarus and lives in Copenhagen. He graduated from the Royal Danish Academy of Fine Arts in 2011 (MA in Media Art). Since then, he has been working mostly in the fields of digital collage, animation, projection mapping and set design. Together with architects from JAC studios, he created both temporary and permanent installations for the Danish War Museum and the Yumin Art Nouveau Collection (KOR). His series of kinetic projection mapping sculptures – Khlora (2016), Kleth (2017) and Marena (2019) – were exhibited at SABSAY Gallery and Den Frie Centre of Comtemporary Art in Copenhagen, and acquired for the collections of Studio Oliver Gustav and the Faurschou Foundation.

In 2017, Georg underwent a period of ‘digital detox’ in a quest for alternatives to his computer-based art practice. During a research trip to the island of Møn, he discovered the beauty and strength of raw flint, which is found in abundance in Denmark’s landscapes. He has spent countless hours searching for, ‘reading’ and processing flint. His latest and upcoming projects took/will take place in a natural setting, largely concentrating on local geology, landscape, prehistory and mythology.